Mohale Tells All About His Toxic Marriage With Somizi on Showmax 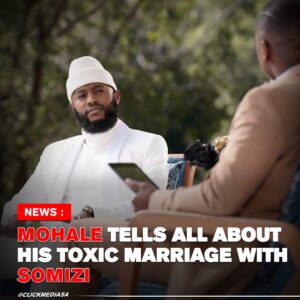 Mohale has been a top trending topic on social media ever since he opened up on  an interview on The Record on Showmax.

In the interview Mohale shares how he & Somizi met, how their relationship quickly turned toxic and how they are still stuck dealing with a complicated divorce.

Mohale says he feels Somizi had everything figured out in his life, that the only missing piece was marriage but unfortunately he wasn’t the perfect puzzle piece to Somizi’s perfect life.

On the Showmax interview Mohale narrated an incident where Somizi allegedly became very physical and assaulted him during an argument in their house.

The argument started as soon as he got home from a work gig in Durban and found Somizi waiting for him, but Somizi completely refused to believe him when he stated his whereabouts.

Mohale says he tried to run away in his car but Somizi followed him and allegedly tried to drive him off the road in Fourways.

He said said once his car was hit, he stopped and Somizi dragged him out of the car and continued to physically assault him.

This toxic public divorce between the two exes has left South Africans divided with some saying Mohale is lying and others saying Mohale could be telling the truth because Somizi allegedly also lied about being straight to his baby mama, before they got pregnant yet he is adamant that he told her that he does he play for both sides.

Ma hale says he was shocked hear that Somizi said he wanted 50% of his assets, when all he truly wanted was his clothing, the car which Somizi bashed & the money for their wedding special on Showmax which was supposed to be split between the 2 of them.

Have you see this episode on Showmax?