Musa Khawula went from being suspended on Twitter. To already being one of South Africa’s the most successful YouTubers on his new YouTube channel.

The channel already has over 20k subscribers with one of his his highest views being 58k & counting on one of his videos. Musa being Musa, has spilled tea about some of your favourite celebrities and recently got blocked on Twitter by Pearl Thusi, after he alleged that Pearl Thusi had a sexual encounter with Aka while he was still dating DJ Zinhle. Pearl Thusi responded to this accusation by tweeting “I’m not even going justify nonsense with a real response anymore. ✌🏽 Enjoy your day guys.” and proceeded to add Musa Khawula to her blocked list.

One user commented on Pearls tweet with a comment “So you’re not denying nor confirming, Musa’s words stand unopposed.”

Another user commented “I believe you my beautiful angel, people are always tweeting lies about you just for the the content. They are annoying really 😡 So Pearl can you please borrow me R5000 I’ll pay you back with interest month end 🙏”

Another user commented “Pearl, there is no need for you to justify anything my love. Umuhle, please go pamper yourself ufake igown and sip champagne. Yhuuuu abantu BAZOKHULUMA. Kelly has mastered it. Why don’t you???!”

Now Musa did confirm in one of his previous Twitter spaces that Mamkhize had actually invested a lot of money in his nee YouTube channel so some believe that she might also be the reason the channel is doing so well.

Musa also alleged on his channel that Lerato Kganyago had sent a dangerous man to intimidate & threaten him at his house in May this year. He says he received a call from a shady man who called him from a private number telling him he knows who he is and where he lives. He says the man said he wanted to meet him then proceeded to read out Musa’s ID number, which was wrong & that unfortunately didn’t shake Musa. He says that same night he later received a message from this same man, which was a video of him driving past Musa’s house, asking him if he knows where this is. He says he believes that this man was sent by Lerato Kganyago who he calls Bonang Lite because at the time they were having their own online beef all because he called her Bongang Lite and talentless.

He also alleged that she had an affair with Naked DJ & Former Executive Mayor of Ekhurhuleno Mzwandile Masina. He says the wife of the former mayor confronted her telling her that she was pregnant. Musa went on to alleg that Lerato and her brother threatened to come beat him up as his job.

Wether any of these allegations are true or not, Musa is spilling all the tea on his YouTube channel and is going after all his enemies one by one.

What are your thoughts & do you believe that MamKhize did in fact invest in Musa’s new YouTube channel and who’s tea would you like to see him spill next? 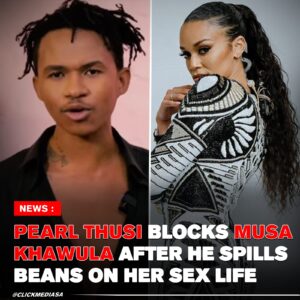