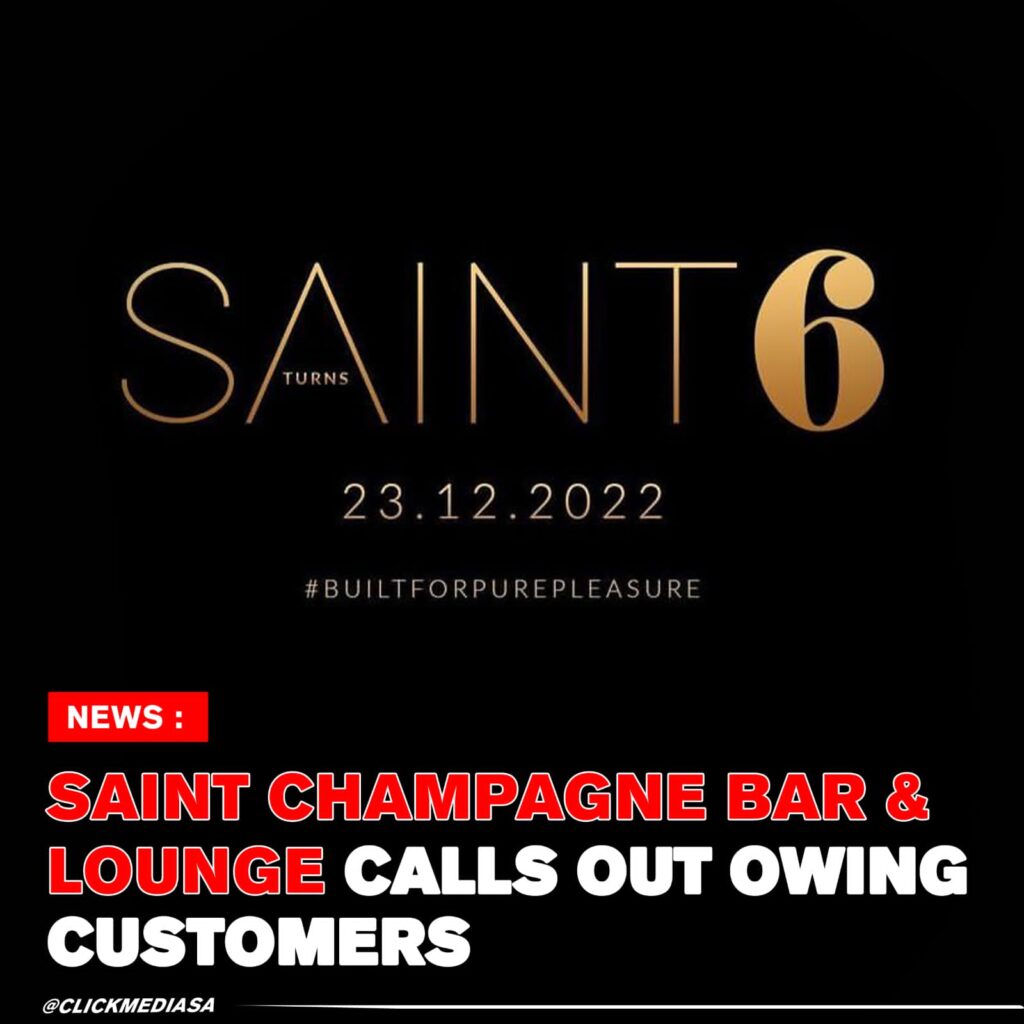 Saint Champagne Bar & Lounge has had enough and has started naming and shaming all customers who have not yet settled their bills.

They have issued the following statement on their Instagram “Attention to all customers owing Saint Champagne Bar & Lounge.  Firstly thank you to all that have paid in full, paid parts and have reached out to us to make arrangements, we are grateful. South Africa and Africa, we thank you for your assistance. To you customers that have asked for an extension until Wednesday, please not you have until 7PM sharp on Wednesday 9 November 2022 to settle your outstandings with us. To those we have posted, we will continue to post you every week until you clear your outstandings. Thank you in advance for your co-operation.”

One of the people they have exposed for not settling his R10k bill is recording and performing artists @officialopa6ix who has over 500k followers on Instagram and doesn’t seem very phased by this exposure. Instead he posted a picture of himself on his Instagram story and tagged Saint Champagne Bar with the caption “Thank you for the free publicity.” He also went live on his Instagram saying that he has spent over 300k this year alone at the venue and 10k is absolutely nothing. He believes the restaurant is only using husband to chase clout & continued to say he will not be paying anything as he is one of their biggest clients. Usually it’s waiters who are crying on social media about customers walking out on their bills, so it seems like people balling on credit is quickly becoming a norm in South Africa.

Saint has threatened to keep sharing photos and amounts owned by these outstandings until their bills have been paid.

Social media user comments have been flooding into the posts with users commenting “We want prices and everything” another user commented “So hall popping bottle on credit? Hai peer pressure is wild hey”

Another user commented “I’m going to follow this page, just to see who the culprits are. We are waiting oh”

Comments of people telling 6ix to settle his Saint bill are still pouring in on his Instagram page but the man is still not phased, still not bothered.. I personally had no idea ballers were outchea balling on credit but hey, the restaurants know why they offer such services.

What are your thoughts on this matter tho? Do you think 6ix and all the ballers who have been exposed so far will be setting their bill or do you see this matter going to court or just dying out? Have you ever balled on credit before & how would you handle this if you were the owner of the establishment?